Artists of Progress (Xiomera/Milintica RP open to all, planning thread)

Artists of Progress (Xiomera/Milintica RP open to all, planning thread)

Hello, this is the planning and discussion thread for the Artists of Progress RP. If you're interested in participating and have questions, feel free to post them here or contact me privately via Discord.

What the RP is about: Empress Yauhmi of Xiomera recently ascended to the Obsidian Throne after the death of her husband, the Emperor Topilpopoca, by winning a uniquely Xiomeran process known as the Great Selection. The Great Selection uses a council of experts to select the ruler of Xiomera. During her bid for the throne, the Empress promised those backing her that she would rule as a traditional Xiomeran ruler, and that Xiomera would remain a highly conservative, ruthlessly capitalistic state with little tolerance for dissent or change.

The Empress lied. Or, as she might say, she encouraged them to believe what they wanted.

Since taking the Obsidian Throne, the Empress has embarked on a series of radical reforms meant to make Xiomera, if not a true democracy, at least less totalitarian and cruel than it had been in the past. Her reforms have upset the powerful military, political and economic leaders of the Xiomeran Empire. More to the point, her apparent intent to restore a hereditary monarchy to Xiomera - and declare her son, Texōccoatl, as her successor - have alarmed the powers behind the throne.

Those powers are about to remind Empress Yauhmi where true power lies in Xiomera - or, at least, where they think it lies. The Empress will beg to differ, and will have a few tricks up her own sleeves.

Immovable objects are about to meet irresistible force, Xiomeran style. Only time, and perhaps your timely intervention, will determine the outcome.

How you can get involved: Just about anything is on the table, short of invading Xiomera or causing it serious damage. If you want to apply political and diplomatic pressure, prefer the less subtle method of sanctions and economic threats, or enjoy the even less subtle methods of covert intervention to support the side you prefer, let me know what you're thinking. Also, if you have questions, feel free to ask them here.
Top

Yauhmi, Empress of Xiomera: Yauhmi has ruled Xiomera since November 2019. While her reign as ruler has been a quite short one, she is by no means new to the corridors of power, having been the wife of the previous ruler, Topilpopoca. Yauhmi has, in a very short period, become one of the most popular rulers in Xiomeran history, and even outside Xiomera as well. The Empress operates more as a force of nature than as a diplomat, and firmly believes that she is the ruler who can change Xiomera's often troubled and tyrannical history. Her approach is a headstrong one, and she has been quite lucky up to now - but her luck may finally be running out.

Texōccoatl, Crown Prince of Xiomera: The heir apparent to the Xiomeran throne, Texōccoatl is the charming complement to his mother's dominant style. Like his father Topilpopoca, Texōccoatl is a former Xiomeran soldier. Unlike both his father and mother, Texōccoatl is known for his ability to be diplomatic. A youthful, brash and handsome figure, Texōccoatl is more than willing to use all of his considerable attributes to win people over to his side - and away from his rivals.

Tlatoani and cihuacoatl: The tribal rulers and supreme judges of each of Xiomera's tribal domains, who will be forced to take sides - and lead the Huenyan tribes they represent down the path they choose, loyalty or rebellion.

Tlihuātemā and Ēqui: The leaders of the native people of Manauia Island and the Netlcoatl Islands, both of whom have been seeking greater autonomy for their peoples.

The Cabinet: Yauhmi's Secretaries in charge of government divisions, who can make sure government runs smoothly - or make sure it doesn't run at all.

Zalpalatli, Secretary of Security: After his predecessor, Tepilcayotl, made the unwise decision to compete with Yauhmi for the throne during the Great Selection, the new Empress installed Zalpalatli in Xiomera's top security position as a reward for preventing her from being assassinated. A former officer with Xiomera's feared Agency for Security and Intelligence (ASI), Zalpalatli is immensely loyal to the Empress.

Tlihue, Director of ASI: The Director of ASI, a traditionalist but also a pragmatist who will side with whichever side is winning at any given moment.

Xochicueyetl, Deputy Director of Clandestine Operations with ASI: The head of the branch of ASI responsible for its field agents; the controller of those who can strike in secret.

Tōpillnao, Deputy Director of Intelligence with ASI: The head of ASI's other branch, its information-gathering and analysis branch; controller of the flow of information.

Xōchhuitl, Tlālpantlizal and Huelixiuh: The commanders of Xiomera's Imperial Army, Navy and Air Force, these career military men share Calhualyana's alarm at the changes Yauhmi is making in Xiomera - and are also determined to uphold the traditional ways of the Empire no matter what.

Cuauh'ez: The commander of Xiomera's fearsome Jaguar Warriors, Eagle Warriors and Shorn Ones, Cuauh'ez is torn between his loyalty to the Empire and his mandate to protect the Empress.

Yāotlah'lotl: The commander of Xiomeran Military Intelligence, the Armed Forces counterpart to ASI; her loyalties are unknown, but will be pivotal to keeping the support of the Xiomeran military.

Imperial Police and Judicial Police: The national police forces, whose loyalties will be put to the test.

Tribal, Municipal and Special Police: The local police forces throughout Xiomera, who will likewise have to choose.

Xiomeran Civil Guard: a volunteer civilian force that assists the Imperial Police and other law enforcement entities in times of need or crisis, led by Imperial Police commanders; each Xiomeran city with 1500 or more people has a Civil Guard garrison

Right-Wing Pressure Groups: Groups such as the Xiomeran Business Association, Patriotic Youth Corps, Xiomeran Students' Association, Xiomeran Servicepersons and Protectors Association, and the Good Citizens' League of Xiomera have all been both potent political pressure groups and organizations for those who uphold traditional Xiomeran values to gain and exercise power. The members of these groups - and their leaders - all have reason to fear the reforms of Empress Yauhmi, and to oppose them.

Left-Wing Pressure Groups: Reform-minded groups such as One Huenya, A New Xiomera and the Xiomeran Scientific and Educational Foundation have all been enthusiastic supporters of the reforms promoted by the Empress, and will fight to the bitter end to prevent the reforms from being rolled back. Many younger people and students will also fall into this group, rejecting the government-sponsored Xiomeran Students' Association and Patriotic Youth Corps.

Tribal activists: Informally organized groups seeking greater autonomy for the Necatli, Itotemoc and Tepiltzin ethnic minorities in Xiomera, as well as the right to teach their culture and languages. These groups have begun to see their desires met under Empress Yauhmi, and will fiercely resist anyone opposing her.

Others to be introduced: Many characters from past RPs may, and will, make appearances, so expect to be surprised when they do.
Top

Map of Xiomera for planning and reference 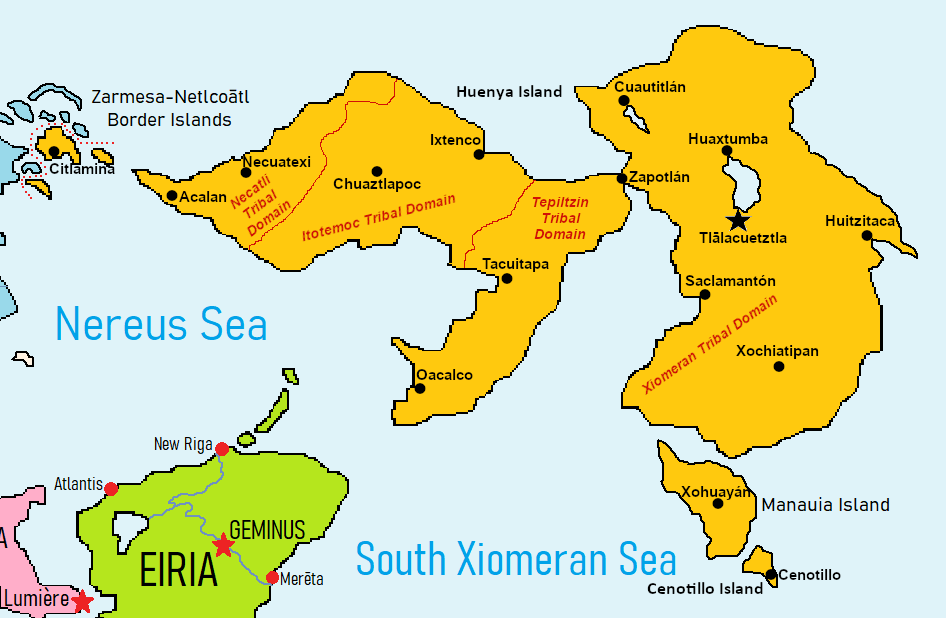 Adding this for reference: Xiomeran Meritocracy: A Primer

This goes a long way to explain the root causes of the conflict in the RP. Basically, the junta and its supporters believe this ideology, while Yauhmi and her supporters think it's pretty much evil.
Top
Post Reply
4 posts • Page 1 of 1